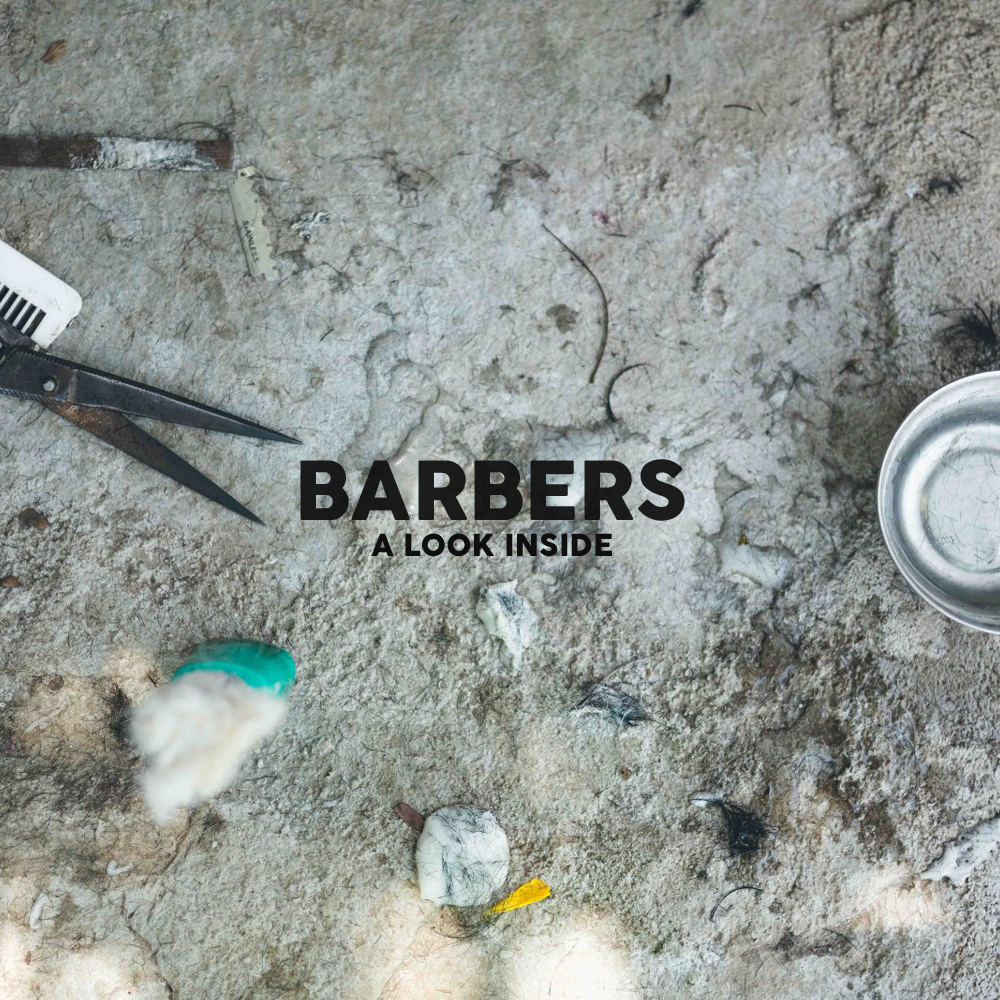 BARBERS: A LOOK INSIDE

Concorde’s third issue delved into a narrative of one of the oldest professions of India. Traditionally a hereditary and caste-based occupation, the barbers of India have been serving the rich and the poor, the old and the young all the same. This issue was an attempt to capture the changing lives of barbers across the country, met with the influx of international brands that are taking over the traditional practice and turning it into a commercial one. It was an ode to the solo barber, who you still might spot in the winding roads across India, operating with a small it, a mirror and a chair. Serving the common man with a  few snips of his scissors, ever so humble.

‘Barbers remind me of the Sunday morning ritual once a month at my colony’s only salon when I was 7 years old. I was made to sit on a wooden platform on top of the barber’s chair and returned home with a NASCAR track laid out around my neck with talcum powder. The only thing that kept me from not resisting to go to the salon were the mirrors. I spent most of my time trying to figure out what was real and what was a reflection. It was like a magic show. So when we decided to shoot an issue on barbers, I decided to play with the mirrors and the subsequent reflections. I used them as a frame and placed the subjects in ways that would make an interesting photograph,’ says photographer Vishnu Oi, who shot the issue. We got in touch with him to take us back in time, and tell us about the few weeks he spent in Kolkata and Hyderabad, shooting Barbers. 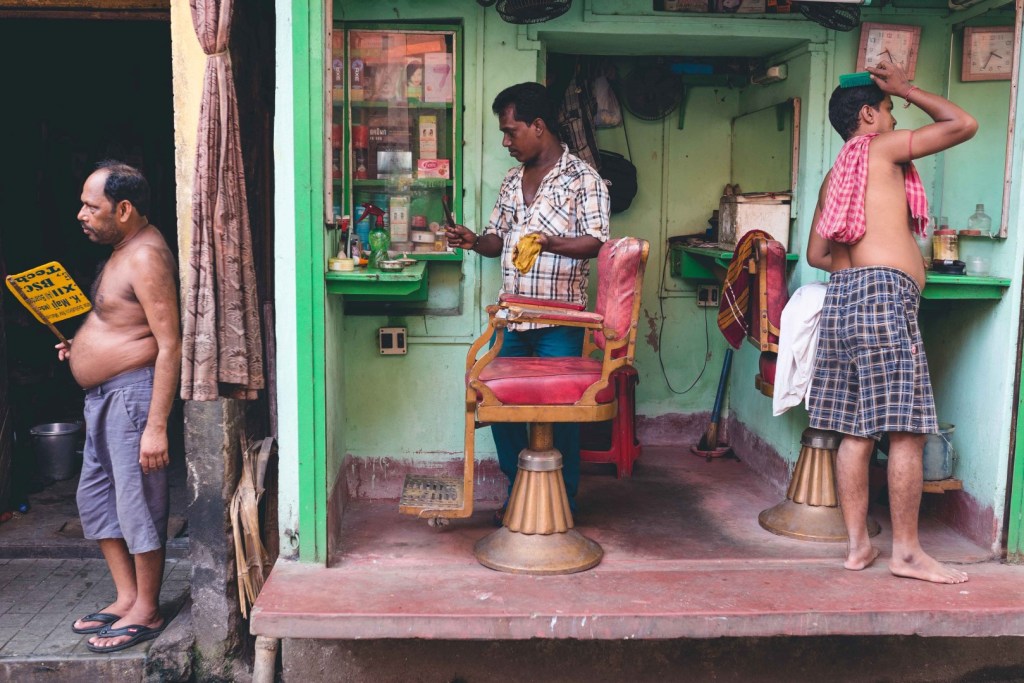 What inspired you to shoot barbers around India?
I think the idea of creating a series around something so mundane got me hooked instantly. I was excited to go talk to the barbers and shoot what I wanted. On a regular day out with my camera on the streets I hardly talk to anyone unless spoken to, but this series in particular made me change my approach. I sometimes revisited a couple of salons to spend more time with the barbers when I knew there was a definite probability of getting a strong image.
I think I found inspiration from a couple of photos shot by Alex Webb, that I found before beginning my shooting spree. The way he uses so many elements in a picture and still manages to strike a balance between all of them and create something surreal from a normal scene is like a springboard of inspiration.

How did you build a narrative for the photo story?
In terms of how we wanted to shoot the photo story, Kishor already had an idea of how’s its going to start and end, but we had a couple of sessions where we decided to ditch the previous plan and build something from what we had in hand. As I was shooting, I shortlisted a few pictures that were interesting and Kishor and I started to work on the composition, to see how the images work together. We knew that it was one of the most clichéd subjects to shoot and it was a bit tricky to build a narrative out of it and not over do it at the same time. So we decided to make it a simple series with a fresh approach in terms of how we were going to show the life around barbers. 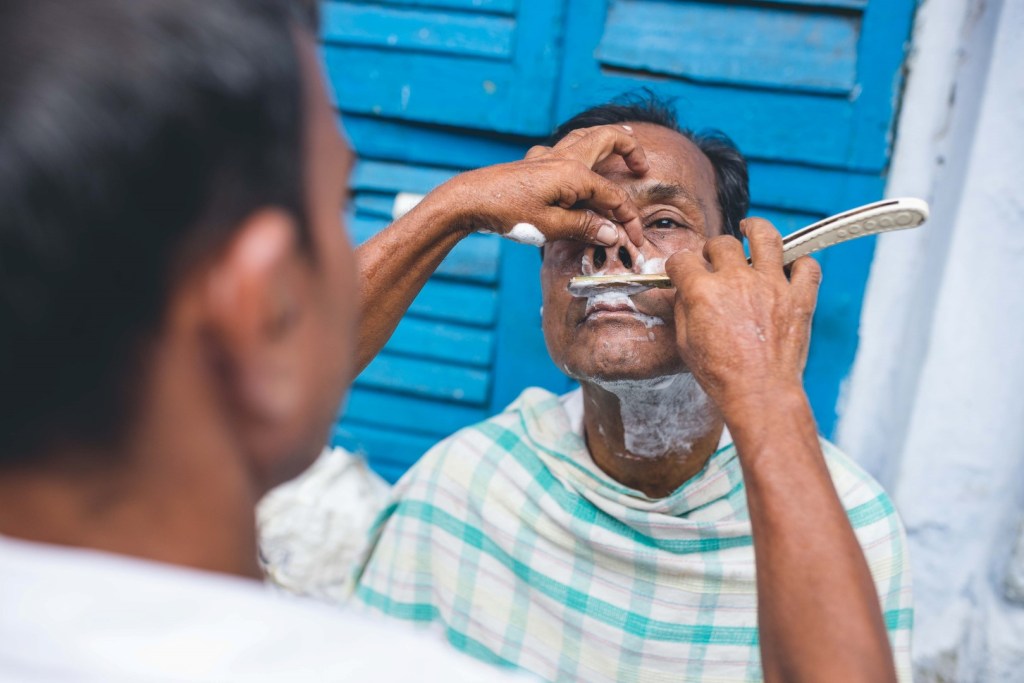 What was your biggest takeaway from this experience?
It’s surprising how each barber can offer every customer a different idea and style so effortlessly, almost like doctors with several patients in a day. On a personal level I’ve had such warm experiences talking to them about how they started out and how they sustained in a city with so many salons popping up at every corner. Their work has to be perfect to retain the customer and with so many new trends every now and then they have to be on their toes, evolving with the flow and learning every day.

Do you have any experiences from the days spent shooting this issue that you’d like to share with us? Any one barber that you still specifically remember?
I met this barber in Dhoolpet, Hyderabad who had a 90 year old barber shop, which had mirror frames from Portugal, mirrors from Germany and so on. Although I don’t have a picture from his salon which made it to the zine, I still remember one afternoon spent with him, sipping chai and talking about how he started working there with his father and brother when he was 8 years old and eventually owned it after much struggle. He told me that earlier they did not run the salon post sunset since they didn’t have electricity in the locale and most of his customers believed that it was inauspicious to chop their hair after sundown due to their religious bearings.

If given a chance to shoot the issue again, would you do anything differently?
I would love to go to different cities to explore the same concept. The salons in Goa have a wonderful European charm that would be fun to shoot. It would be exciting to work on a series where I can show how the barbers around India are so different and yet so similar at the same time. 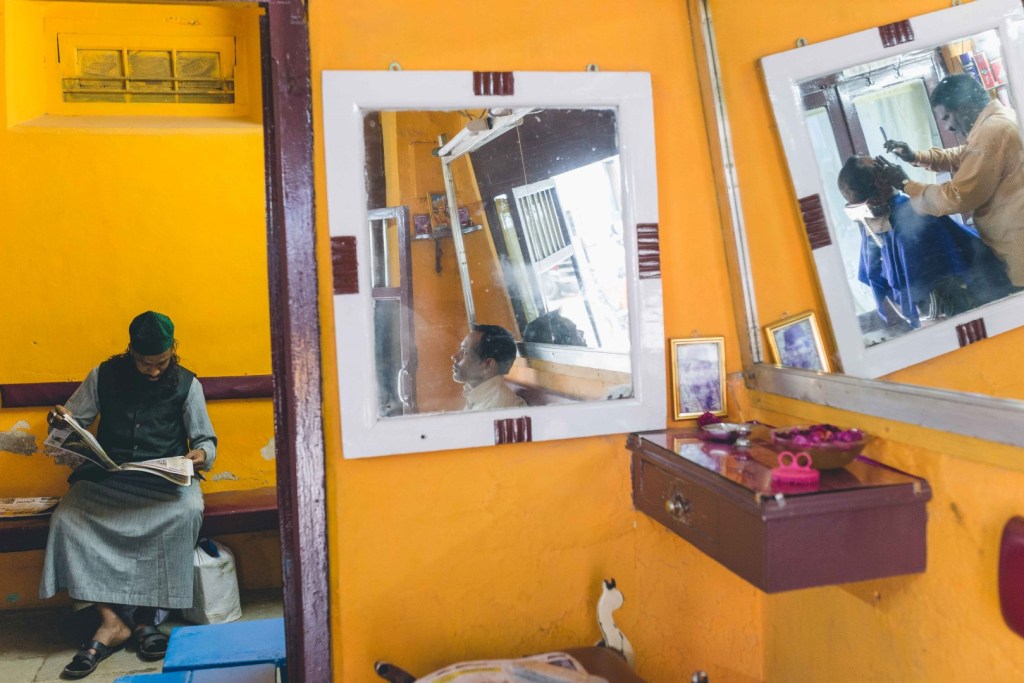 If you haven’t picked up your copy of Barbers yet, find it here http://bit.ly/2cBPn3q